BSP is absolutely thrilled to welcome Tahlia DeCorso as our new Music Director.

Be the change you want to see

Laurence Wall of CBC Ottawa once again did a stellar job as MC of our Christmas Concert on December 20th. Building on the theme of the concert, “Be the change you want to see”, he encouraged the audience and performers to believe in the power of humanity to make change.
The show was all about reminding us that we must all live that change--in our own ways. We can all be catalysts for positive change. It might not be a grand gesture. It might just mean smiling at someone even though you're having a bad day or giving your time to someone who needs your help.
On a lighter note, as he introduced himself, Laurence said that this was his fourth time MC’ing our concert and according to his calculations, “...one more concert and I become the official mascot for Big Soul.”  We’ve already named Laurence as honourary BSP member!
Laurence Wall posing with choir members just before the concert started. 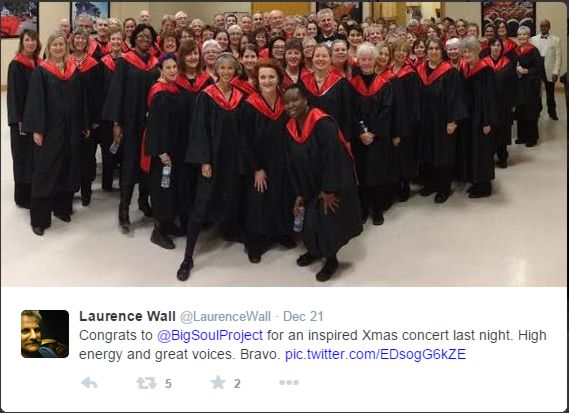